Some photos I took at Jeffery Deitch LA: Shattered Glass 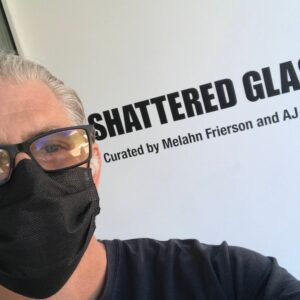 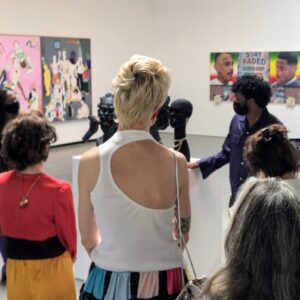 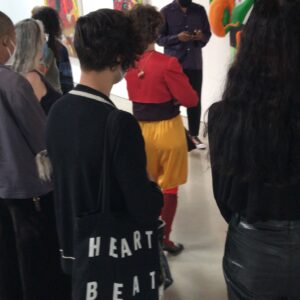 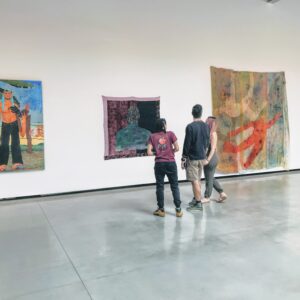 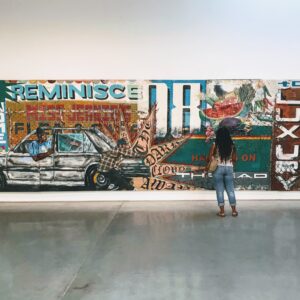 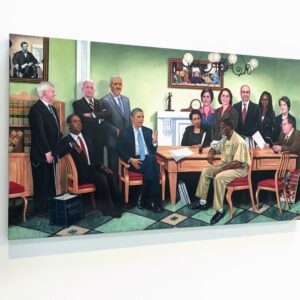 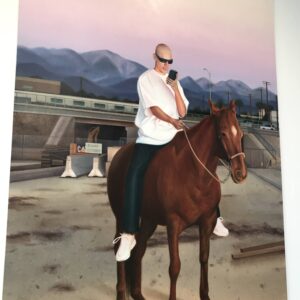 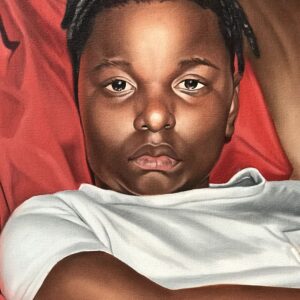 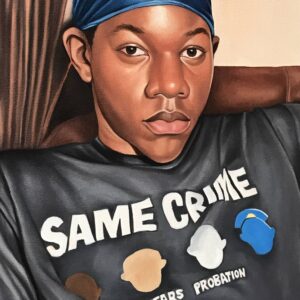 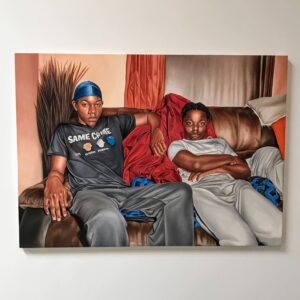 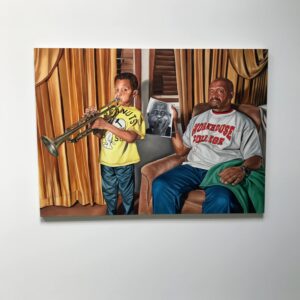 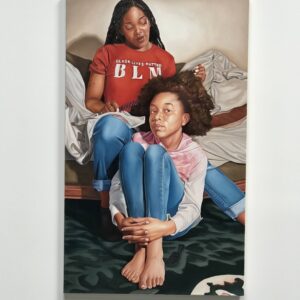 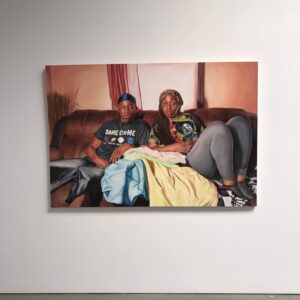 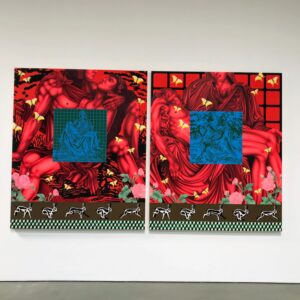 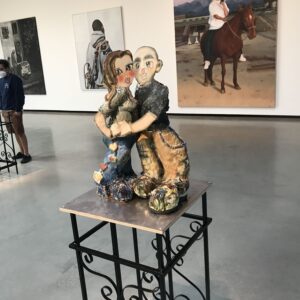 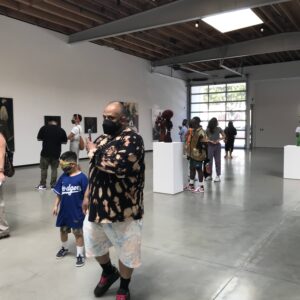 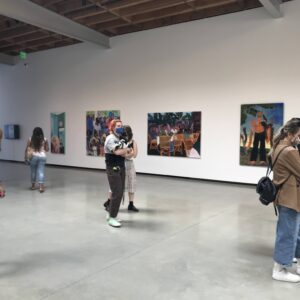 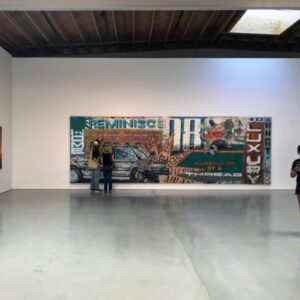 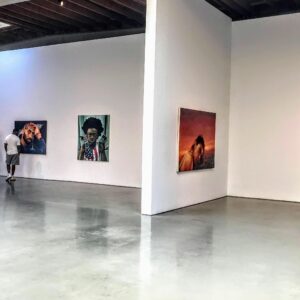 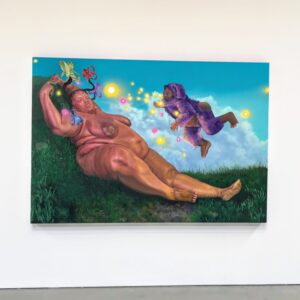 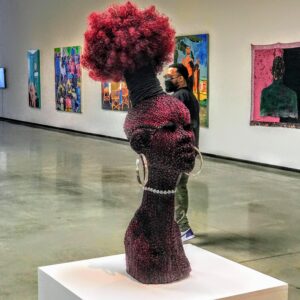 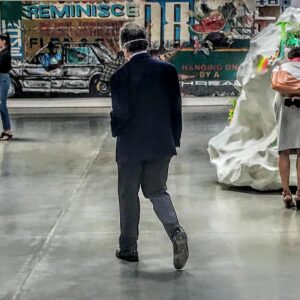 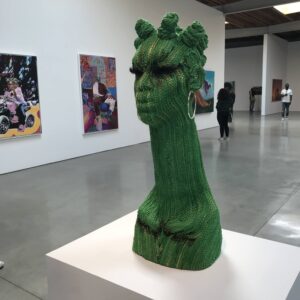 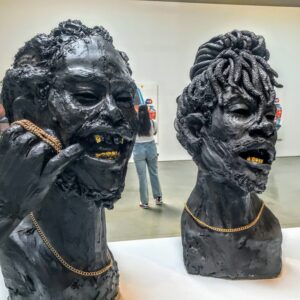 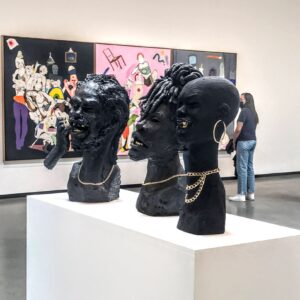 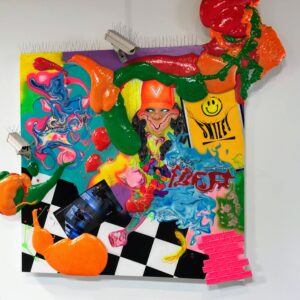 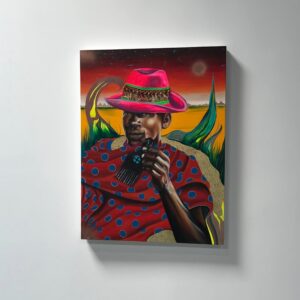 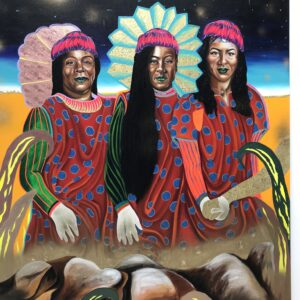 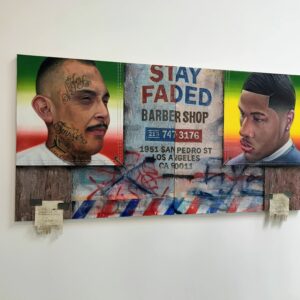 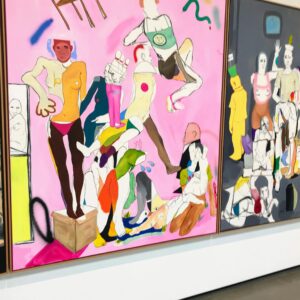 Open by appointment
Tuesday–Saturday, 11 AM–6 PM

About the Show: Shattered Glass, Curated by Melahn Frierson and AJ Girard

Shattered Glass gathers a group of 40 international artists of color whose subjects don’t ask, but rather demand to take up space. Subjects whose gaze unflinchingly holds the viewer. Figures literally walk off the canvas, asking for more than a life beyond subjugation. The artwork gathered for this exhibition introduces a new narrative altogether, and intends to shatter the glass of the long existing power structures in the art world.

Visibility within the arts has historically been racially determined by existing hierarchical power structures. This directly correlates to the erasure of Black and Brown bodies in the art world. There still exists a massive lack in images of self-affirmation and representation for people of color in traditional figurative portraiture. The result has forced those outside of this one-sided narrative to perceive their history through a predominantly white lens deemed as Universal. It is crucial that our community members, who have historically felt uncomfortable and unwelcome in institutional art settings, finally see themselves represented in these spaces and beyond.

Several of the works gathered here explore questions of power, surveillance, and justice in the quotidian Black and Brown experience while speculating on radical futures. Going against the grain, where these bodies have been historically weaponized, they are now seen as divine: simultaneously destroying and reconstructing the self. Artist Kezia Harrell defines identity as the one true thing we have, and her phantasmagoric self-portraits lead us to an entirely new universe for Black identity that exists far from the heavy traumas of the past. Similar to Harrell, artists Simphiwe Ndzube and Phumelele Tshabalala’s work is beautifully saturated in surrealism and fantasy, narrating the Black experience in post-apartheid South Africa from a mythological perspective.

This past year’s civil rights movement and shifts in societies’ interactions alongside a global pandemic that disproportionately affects Black and Brown communities calls for meditative reimaginations of what world we would like to see ourselves in. Shattered Glass focuses on redefining the tradition of western figurative art through painting, sculpture and film. The artists explore and expand the possibilities of self-determination while situating their place in this flux system.

Prominently featured in the exhibition is the work of Fulton Leroy Washington, known as Mr. Wash. A self-taught artist wrongfully convicted in 1997 for a non-violent drug offense, Mr. Wash was sentenced to life imprisonment, the mandatory minimum appointed during the era of the “War on Drugs,” until President Barack Obama commuted his sentence and granted him clemency in 2016. The subjects of Mr. Wash’s photorealist paintings range from politicians and fellow ex-inmates to celebrities, family and friends. His subjects are often painted against introspective-dream hybrid backgrounds.

Mr. Wash is currently included in Made In L.A. at The Hammer alongside Shattered Glass artists Kandis Williams and Mario Ayala. Williams’s work explores and deconstructs critical theory entangled with issues of race, aesthetics, ethics and the libidinal. Her practice spans collage, multimedia, writing, pedagogy, and performance. Ayala’s work as with the work of emerging artist Alfonso Gonzalez Jr.—two L.A. natives—brings in a perspective from the East Side of Los Angeles. Borrowing vernacular from car culture and traditional aesthetics from hand-painted commercial sign painting, both artists narrate their own distinct familial histories of labor and image-making. They both draw equally from pop culture, with a particular attention to mediums associated with the representation of Latinx identity:the culture found on the streets, in a strip mall, or on graffitied neighborhood walls.

Marking, typography and large scale dominate the work of both Lauren Halsey and Devin Reynolds. Their subject matter focuses on communities facing gentrification, proving that We Still Here, even if the conditions of “Here” have changed. Aesthetically mobilizing the perseverant strengths that have held their communities together, Halsey and Reynolds usher in a new form of Black radicalism. Shattered Glass also features an exciting video program of 10 artists, ranging from established to emerging non-disciplinary filmmakers.

Coming together for the first time to co-curate this exhibition of Black and Brown diaspora is Cultural Strategist and Arts Educator AJ Girard, and Melahn Frierson, Director of Jeffrey Deitch Los Angeles. Girard is well known for his extensive educational outreach work at the California African American Museum, The Broad and The Underground Museum.

“Since I’ve known him, AJ has always shown a deep commitment to elevating the voices in our community,” stated Frierson on her initiation for the collaboration. “I’ve long wanted to highlight the Black and Brown experience in America, and AJ’s unwavering energy and unique passion for the narrative and thoughts surrounding Black cultural expression has been a wonderful gift to this exhibition.”

Shattered Glass makes space for the creative voices of the community to speak as individuals and in community. We invite you to explore the vast talent of this group of artists; a new class of innovators who point toward imagined utopias. From the sands of the Dominican Republic, academies in London, South Africa, California and the southern terrains of Louisiana and Texas, these artists are all linked together through a diasporic lens. Relationships of friendships, partner and sibling bonds all help to gather this voice together, and together we continue forward towards a future only artists can imagine.

The artists participating in Shattered Glass are:

All copyrights belong to the respective owners.